Caught all year (except closed in January)

Halibut belong to a family of flounders called Pleuronectidae. The scientific name for Pacific halibut is Hippoglossus stenolepis, a name derived from the Greek hippos (horse), glossa (tongue), steno (narrow), and lepis (scale).

Most halibut are torpedo-shaped and symmetrical, often with heavily pigmented backs and light, white bellies. Flounders are compressed laterally and, except in the larval stages, have both eyes on one side of the head; halibut usually are dextral, that is, both eyes are on the right side. On the eyed side, pigmentation varies from olive to dark brown or black with lighter, irregular blotches that are similar to the colour pattern of the ocean floor. This protective coloration makes the fish less conspicuous to predators and prey. The left or blind side is white with occasional blotching and faces the ocean bottom. 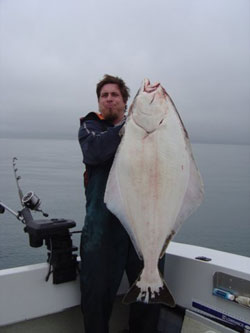 Halibut are strong swimmers and carnivorous feeders. Larval halibut feed on plankton. Halibut one to three years old are usually less than 12 inches (30 cm) in length and feed on small shrimp-like organisms and small fish. As halibut increase in size, fish become a more important part of the diet. The species of fish frequently observed in stomachs of large halibut include cod, sablefish, pollock, rockfish, sculpins, turbot, and other flatfish. Halibut will often leave the bottom to feed on pelagic fish such as sand lance and herring. Octopus, crabs, clams and an occasional smaller halibut also contribute to their diet. Crabs with a carapace width of up to seven inches have been found in the stomachs of halibut, although halibut do not appear to be a primary predator of crab. The size, active nature, and bottom dwelling habits make halibut less vulnerable to predation than other species. Halibut are occasionally eaten by marine mammals and are rarely found as prey for other fish.

Pacific halibut can be found along the continental shelf in the North Pacific and Bering Sea. They have flat, diamond-shaped bodies and are able to migrate long distances. Most adult fish tend to remain on the same grounds year after year, making only a seasonal migration from the more shallow feeding grounds in summer to deeper spawning grounds in winter. 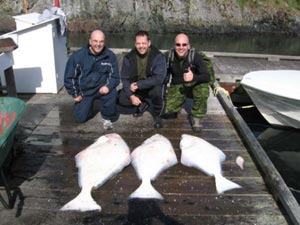 Halibut spawn in deep water, where the eggs are fertilized. The number of eggs produced by a female is related to its size. A 50-pound (23-kg) female will produce about 500,000 eggs, whereas a female over 250 pounds (113-kg) may produce 4 million eggs. As the eggs develop into larvae and grow, they drift slowly upward in the water column. During development, the larvae drift great distances with the ocean currents in a counter-clockwise direction around the Northeast Pacific Ocean. By the time the young fish settle to the bottom in the shallow feeding areas, a significant journey awaits. Following two to three years in the nursery areas, young halibut tend to counter-migrate and move into more southerly and easterly waters.

By the time Pacific halibut enter the commercial fishery (at about 8 years old) most of the extensive counter-migration to balance egg and larval drift has apparently taken place. However, adult halibut migrate annually, moving to deeper depths on the edge of the continental shelf during the winter for spawning and into shallow coastal waters in the summer months for feeding.

Maturity varies with sex, age, and size of the fish. Females grow faster but mature slower than males. Most males are mature by the time they are eight years old, whereas the average age of maturity for females is about 12 years. From November to March, mature halibut concentrate annually on spawning grounds along the edge of the continental shelf at depths from 600 to 1,500 feet (183 to 457 meters). The major Canadian spawning sites include Cape St. James, Langara Island (Whaleback), and Frederick Island. Other reported spawning locations include Goose Islands, Hecate Strait, and Rose Spit. Spawning concentrations also occur in the Bering Sea. In addition to these major grounds, there is reason to conclude that spawning is widespread and occurs in many areas, although not in as dense concentrations as those mentioned above. Evidence to support this conclusion is based on the widespread distribution of sexually mature halibut during the winter months as indicated by research and commercial fishing.

The commercial halibut fishery is open from March 15 to November 15 each year. The recreational fishery is open from February 1 until December 31. Communal licences are issued to coastal aboriginal communities, to allow them to fish for food and for social and ceremonial needs, from April 1 to March 31 each year.