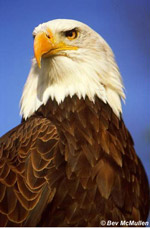 The Bald Eagle Haliaeetus leucocephalus is an enormous bird. Haliaeetus denotes “sea eagle,” and leucocephalus refers to its white head. The wings, wide and long for soaring, span more than 2 m. When perched, the bird measures about 76 cm tall. Weights of over 7 kg are not uncommon.

On average, females are larger than males, and juveniles are larger but lighter in weight than adults of the same sex.Bald Eagles may be seen at any time of the year, but they often gather in large numbers when food is plentiful. In the spring, when the herring spawn, the eagles join thousands of seabirds, and marine mammals, off the east coast of Vancouver Island. In the fall and winter, they move to the salmon streams to feed on the spawned-out fish. There is rarely a day on the southwest coast of Vancouver Island that we are not accompanied by our feathered friend the Bald Eagle. 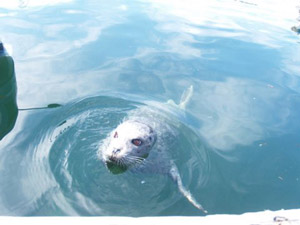 Harbour seals are fairly common and are often seen on rocks and in coves. They breed locally and generally have a mottled appearance. Alaskan and western Pacific harbour seals are significantly larger than those in the Atlantic and those in the more southern areas of the eastern Pacific. Generally, adult males measure 1.4 to 1.9 metres in length and weigh 55 to 170 kilograms, while the smaller adult females measure 1.2 to 1.7 metres in length and weigh 45 to 105 kilograms. Pups are usually born measuring 70 to 100 centimetres in length and weighing eight to 12 kilograms. Most male Harbour seals reach sexual maturity at five to six years of age, while females mature earlier, at two to five years. Harbour seals have sometimes been known to dive over 500 metres and remain underwater for periods of more than 25 minutes. 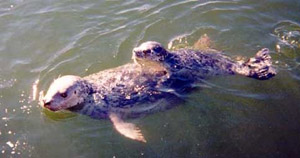 Male harbour seals have a shorter life span than females, possibly due to the stress of competing and fighting during the breeding season; males can live up to about 20 years of age, females to around 25 to 30 years. On our return to Becher Bay Marina, the resident population of harbour seals will encourage us to clean the fish faster with a few slaps of their flippers.

Few experiences compare to witnessing a 5,000-kg (12,000-lb) Orca arcing out of the water and landing with a splash that can be heard for several kilometres. No wonder, then, that whale watching has become such a popular activity on Vancouver Island. About eighty Orcas live in the waters off the southern island coastline year-round.
Grey whales traverse these waters in great numbers during their annual migration between March and October.