Chinook salmon in marine phase:
Black gums and a silver, spotted tail distinguish the chinook from other salmonids. It has a lightly spotted blue-green back and is the largest, most prized game fish. The chinook lives from three to seven years. It weighs between 1.5 kg and 30 kg. Average-size chinooks are often known as springs in B.C. Those over 13.5 kg are called tyees, and in the U.S., chinook are called king salmon. 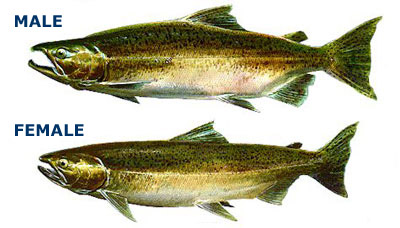 Fresh run fish are very similar in appearance to salt water fish – lightly spotted blue-green back, black gums and a silver, spotted tail. As chinook mature, they become very dark in colour – some dark reddish, and others almost black. 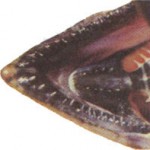 The chinook has black gums at the base of its teeth and its mouth is dark. In some areas it is known as “black mouth”. 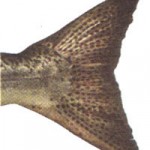 The chinook has a flowing V-shaped, silvery tail that is generally covered with spots. The tail becomes more square as the chinook reaches adult stage.

There are more distinct populations of coho than of any other Pacific salmon species in BC.
Although coho tend to remain close to the coastline, they have been found as far as 1600 km from shore.
Juvenile coho defend their territories through a series of maneuvers including a complex shimmy-shake, dubbed by scientists the “wig-wag dance”.

Description of coho salmon in marine phase:
Coho have white gums, black tongues and a few spots on the upper portion of their bodies and silver-coloured tails. They have a wide tail base. Bright silver with a metallic blue dorsal surface. Coho usually live for three years and grow rapidly in their final year. They weigh between 1.3 kg and 14 kg. In the Strait of Georgia from April to early June, small coho passing from the grilse stage to maturity are called bluebacks. In the U.S. Coho are called “Silvers”. 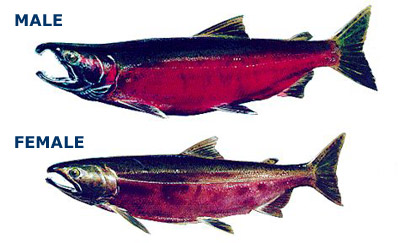 Fresh run coho are very similar in appearance to salt water fish – bright silver with a metallic blue dorsal surface, and a wide tail base with a few spots on the upper portion of their silver-coloured tails. As coho mature, the males become reddish on the sides, and green on the back and head, often dark on belly. Females are less strongly coloured.

The coho’s gums at the base of the teeth are almost white. Its mouth is white, and its teeth are sharp and strong.

The coho has a square, silver- coloured tail with just a few scattered spots, usually on the upper portion of the tail. It has a wide tail base.

Chum salmon are found throughout the Pacific Rim, from Oregon to Alaska and as far afield as Japan and Korea. Chum are the poorest jumpers of the Pacific salmon world and waterfalls that do not impede any of the other species can often stop their upstream migration. This is a preferred fish for cold-smoking, owing to the low oil content of the flesh. 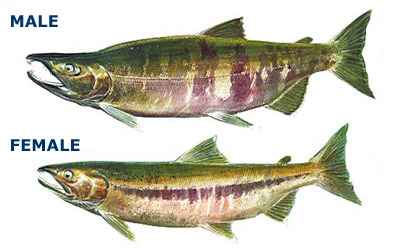 The lips are fleshy with well-developed teeth in both jaws, but there are no teeth on the base of the tongue.

The tail is slightly forked and has silver streaks covering about half of the fin. The caudal peduncle or wrist is slender.

Pink salmon are the most abundant of the seven species of salmon in BC waters. Pinks have a short, two-year lifespan. Fishermen know these salmon as “humpbacks” or “humpies” due to the humped back developed in males as they return to spawn.

Description of pink salmon in marine phase:
Pink salmon have tiny scales and a tail heavily marked with large oval spots. Unlike the other salmon species, the tail of a pink has no silver in it. In the sea, pinks have silver bodies with spotted backs. They are the smallest of the Pacific salmon, usually weighing about 2.2 kg, but occasionally reaching 5.5 kg. They are more abundant in northern waters in even-numbered years and in southern waters in odd-numbered years. Pinks live only two years. Each pink salmon you keep must be at least 30 cm long. 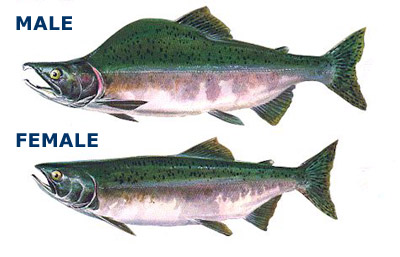 The mouth in a pink salmon is white, but the gums are black, as they are in a chinook. It does not have “teeth” on its tongue.

The pink salmon has a V-shaped tail coverd with large oval spots. Its scales are very small.

Caught from July to September

Sockeye were the first salmon to be harvested commercially in the Pacific Region. The rich colour and oil content of sockeye may be attributed to their diet which includes a high percentage of shrimp and other crustaceans. The name sockeye is believed derived from the Coast Salish name “sukkai” at one time in common usage in southwest BC.

Description of sockeye salmon in marine phase:
The sockeye is almost toothless, with numerous long gill rakers and prominent, glassy eyes. The slimmest and most streamlined of the Pacific species, the silver-blue sockeye lives from four to five years. It usually weighs between 2.2 kg and 3.1 kg but can reach 6.3 kg. Young sockeye remain in fresh-water nursery lakes a year or more before migrating to the sea. Each sockeye salmon you keep must be at least 30 cm long. 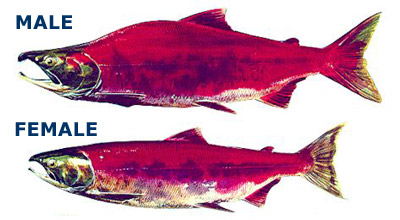 Maturing sockeye have a distinctive silvery-purplish tinge. As he becomes more mature, the male acquires a pale green head, dark hooked jaws, humped back and bright red body with red fins. The female is generally the same with green and yellow blotches on the body, although the colour is less pronounced and she does not develop a hump or hooked jaw. In most runs mature fish are bright scarlet.

The lips of a sockeye are fleshy, the teeth are small and well-developed in both jaws. There are no teeth on the base of the tongue.

The sockeye’s tail is moderately forked and it does not show any black spots.